I got the call that the crocodile was back sunning himself (don't know if it is a male or female. Not going to try to find out either. Because of the size, I'll call it a him.) on the walk behind the place, so I went over and took some more photos.  Some were on my phone camera and the rest were from the GoPro. Once I got the photos of the critter, I walked about the place taking some shots of Casa Grande and its inhabitants. Here are the shots I liked. 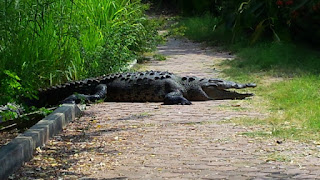 Posted by Canyonwren at 2:25 PM 0 comments 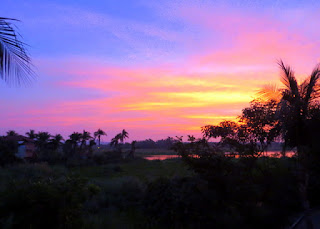 I usually roll out of bed and go to the bathroom about 3:30 AM.  It's at this time that one rooster, somewhere out by the lagoon, starts out his endless pursuit of a hen.  Once this guy starts, then a chorus of misfit roosters starts in crowing, until we get out of bed for the morning.

I am used to the roosters, in fact, I have gotten used to the dogs barking endlessly at nothing at all. The dogs and roosters take the lead as a million frogs choke out their love calls. It becomes a symphony of noise which is then broken right around 8:00 AM, with the sound of the Global Gas truck starting it's daily neighborhood runs.

Off in the distance, you can hear a faint "Global Gas" blared from the trucks sound system. On our street, as the truck comes closer, the local dogs start a mournful howl, joining the gas trucks wail. For five minutes or so it is like these creatures are trying to tell the truck to keep on going, it is not wanted here. The truck drives on and the dog song stops. This happens twice a day and makes me laugh each time.
Posted by Canyonwren at 11:25 AM 0 comments

To tell this story, I want you to picture yourself riding in a boat on a very blue ocean. Sit and watch the wake of the boat as the day goes by. Sit there for about four hours.

Suddenly you hear the sound of your reel. It's a loud and heavy grating noise, like that of a jake brake being applied. Then the boat surges as the throttle is jammed forward. The engine races, the reel- drag groans and suddenly a huge blue marlin launches out of the water 10 yards off the starboard aft rail. It happens as quick as a wink of your eye, but the image remains in your head in slow motion. 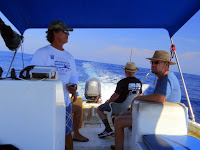 The marlin shoots like a torpedo out of the blue, the line is slack from his evasive move, and you watch as your big lure drops into the ocean. You look around at Gerry and the rest of the group and their eyes tell the story. Big fish! Moments of excitement! Then back to watching the wake behind the boat.

That's how it went yesterday. Our radio confirmed several marlin caught, we witnessed two, but nothing for us. Just another great day on the water.
Posted by Canyonwren at 8:27 AM 0 comments

Daren and Marcy Upchurch arived to their casa in Melaque today. We went to lunch at a small sandwitch place called Rosita's. Linda fell in love with her sandwitch.

After that we went and played cards with the Casa Pink folks followed by sunset and then dinner at Maria's. We ended the night on the beach for a fire and globos launch. A very nice Valentine's Day I might say. 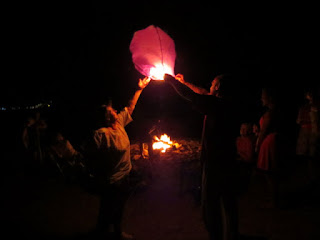 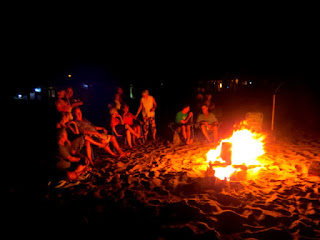 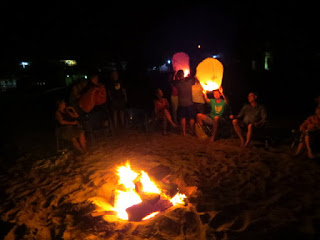 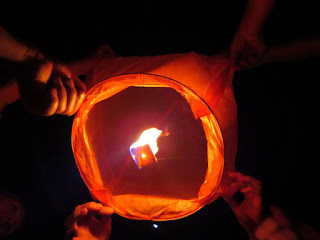 Posted by Canyonwren at 8:40 AM 0 comments 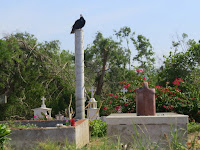 Yesterday we went over the hill to La Manzanilla so that Tom and Debra could have a day on the beach.  It was another great day and I spent most of my time watching all the people doing their beach thing. 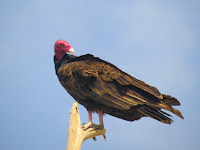 During the day, I took a long walk on the beach and took some pictures. One set of photos was of vultures sitting on tree limbs, and another was of a single vulture sitting on a concrete pillar overlooking a cemetery. I felt this was a little eerie so I quickly walked away. 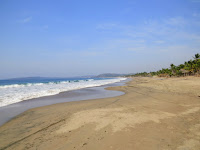 Back at Pedro's, I sat and ate my shrimp tacos. A mariachi band came into the area and I had to laugh. Our friend Dennis had a theory: if he was eating and a band of any type came into the area, it or the singer would set up directly behind Dennis and he would be forced to listen to their music. Dennis would get a look on his face and we would laugh.  This video is for Dennis. 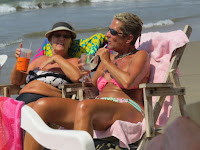 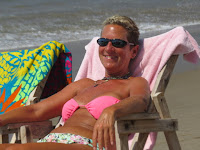 Posted by Canyonwren at 7:37 AM 0 comments

Remember a Couple Years Ago? 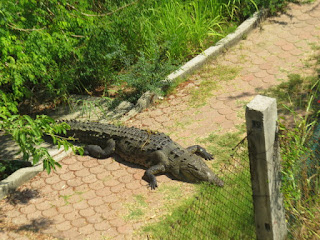 I was just sitting up in the room after lunch when Linda called out that there was a huge crocodile sunning itself on the walk behind our casa. I grabbed the camera and headed out to see if I could get some pictures.  Man, that creature was huge!

It was laying directly behind the lot that we stayed in when we were staying in our camper about three years ago. We always were cautious about Kobi being around the lagoon and this shows you the prime reason why. Kobi would be a scooby snack for that croc! 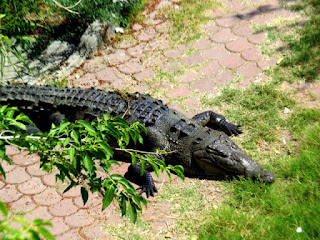 I took a bunch of pictures from the casa roof and the lot and then took my bike around to see if I could get a shot of the critter as a speed bump on the walkway.

Down the street, four little neighbor girls had set up a lemonade stand and were selling the drink for either a song or a joke. When Linda and I had walked by earlier, Linda told a joke for her drink. "What did the father buffalo say to the son buffalo when he left for work?" "Bison!" They were in third grade and it sort of went over their heads.

I stopped when I went to see the croc and told them a joke I had looked up online. "Why is 6 afraid of 7?" They all shouted, "Because 7,8, 9!"  Then they told me that everyone in B.C. knows that joke! I was so unprepared for that, all I could do was drink my drink and ride off.

I rode to the walkway behind the casa and got to the top of the hill behind our place and as soon as I got off my bike the big croc looked my way and backed into the lagoon. No photos of the big speed bump! I rode back to the place and took some photos on the way, but none of the crocs I spotted were anywhere as big as the one behind our place. 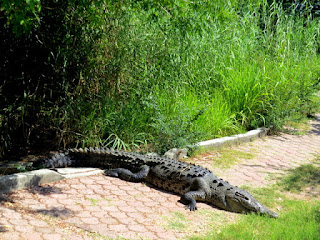 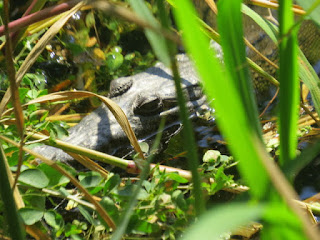 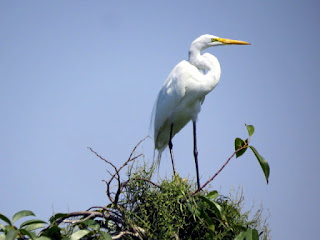 Everyone from our side of Casa Grande got together and had a big potluck last night. It was very fun with lots of food and dessert. I cooked on the grill.

Once we finished dinner they broke out a computer and started singing to a karaoke program. French karaoke is tough to follow. 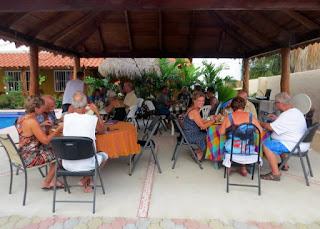 Posted by Canyonwren at 6:08 PM 0 comments

I just got home from volleyball,
looked out the back door oh boy,
look at all the happy creatures,
sitting on the walk!

You can take it from there. At lunch time today this couple were outside our back door having a snack on the hibiscus blooms. Very cool. 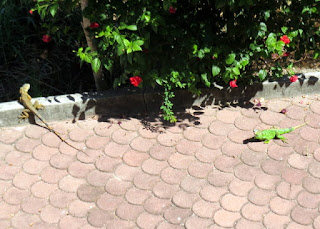 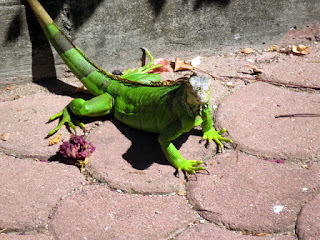 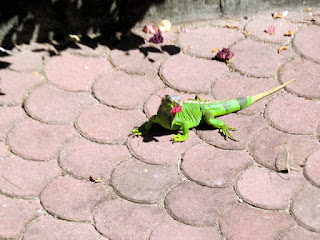 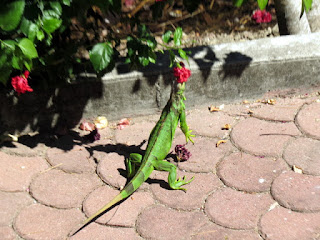 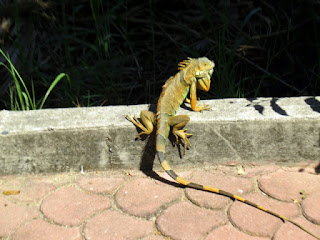 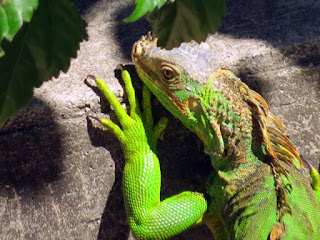 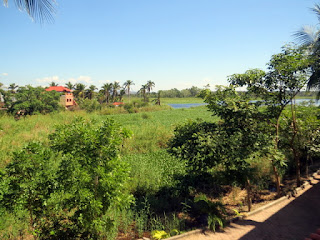 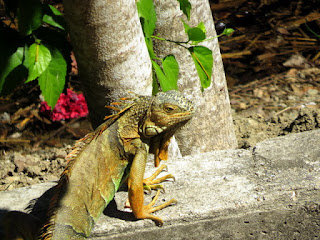 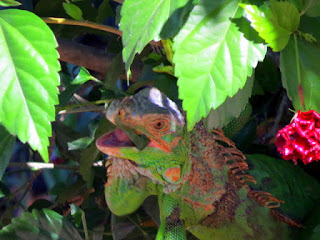 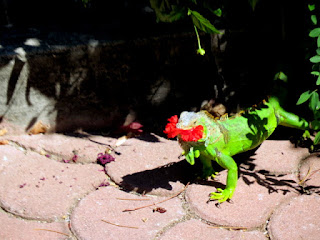 The bus  costs 7 pesos each way to get to Barra and back. The boat ride to Mary's Resturant is free if you eat dinner there. Dinner will be around 200 pesos and sunset costs you a couple drinks at the roof top restaurant. Add it all up and for less than $20 you have a night with friends and a sunset you will never forget. I think it's worth it, don't you? 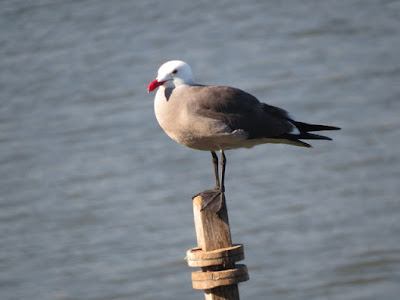 Posted by Canyonwren at 6:51 PM 0 comments