We have been home and shoveling snow since mid day Saturday. With a cup of coffee in hand and a couple nights rest under my belt I figured I would wrap up the trip and post a bit of a warning to all our traveling friends.

Our trip was great! We had a very restful vacation and were able to accomplish our one goal that we had set when we started.  The goal was to find a place for us to live in our camper next year when we travel down for an extended stay. (See post below)

On our return trip we/Linda did have quite the experience with TSA. Here is the story.  We took a taxi to the airport and got through the initial luggage check when Linda's name was called over the loud speaker.  She checked in and found that she had been chosen for a complete bag inspection.  This was no big deal because a complete inspection in Mexico was not very extensive.  They did the inspection and then let her board early so it was no big deal.

We landed in LA and made our way through all the rig-a-ma-roll of inspections entering the country, except the final re-entry into the airport through TSA.  Linda presented her ticket to the first TSA agent and was told the they needed to refer her to a supervisor.  Again she was chosen for a "random" inspection.  She was pulled aside and everything she had was extensively searched.  When I say extensively, I mean every thing was removed, unfolded, and scrutinized.  Her underwear was pulled out and fondled to the point of ridiculousness.  As the inspection went on Linda was made to stand and watch everything they did.  She could not sit down, she had to go to the bathroom (we had just flown three hours), and all this was happening in front of everyone in the world.  The inspection process took over and hour and forty five minutes!

As the inspection went on two guys, not in TSA uniforms, watched.  I was getting mad, but knew there was nothing I could do.  I talked to the two guys and found that they were there as independent observers documenting the process.  They told me that this was a process that was required by the airlines, not TSA.  It was random, and that they had to observe six inspections each day.  They felt very bad for Linda, but of course, there was nothing they could do. As the process went on I got madder and Linda was losing it.

At about an hour and a half into the search I started calling the airlines, Alaska, to file a complaint.  I got connected to a service agent and explained all the facts. She immediately said that Alaska had nothing to do with the process and that it was TSA and that we needed to talk to them.  I explained that I was standing with two independent observers hired by Alaska to document the process and they had told me that it was a check required by Alaska.  I said that TSA had also told me the same thing.  The agent was indignant and slightly rude in her reply that it was TSA and only TSA.  I was mad and knew I was getting nowhere so I hung up.

When the inspection was finished TSA walked away.  Linda was left with everything from her two bags strewn all over the stainless steal inspection table.  She had to repack everything!  No one said a word!  I was standing away watching and the only thing that happened was one of the independent observer guys came over and said "I think she is done, you can probably go help her repack."  He shook his head and left.

We repacked the best we could and walked to the snack shop where the Burch's were waiting.  We boarded the plane and went to Seattle. 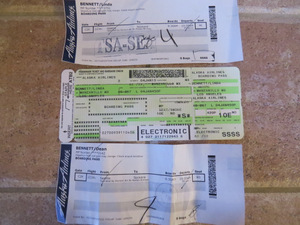 The next morning we took the shuttle back to the airport and when we checked into the TSA check stop it happened again!  Linda was pulled out for inspection.

We both lost it, but this time the TSA were very nice about it and even though she was inspected, they did the process quickly.  We found out that it was something that was called for by Alaska, and TSA was alerted by a SSSS designation on her ticket (see photo.)   They also said that the inspection should not take one hour and forty five minutes and that it was probably a TSA in training situation. If you get a boarding pass with the designation SSSS be aware that your probably will have to be inspected. Even though the inspection was fast and they were very pleasant about it was an ordeal. Linda said the TSA supervisor checked in with her several times during the inspection.  We were not as upset as we were in LA, but it was totally not necessary.

We made it home with no further trouble.  Daren and Marci picked us up at the airport and we arrived back home to snow and a warm greeting from Kobi.  Today I will call Alaska and see how I am treated.  Stay tuned.
Posted by Canyonwren at 9:07 AM 1 comments 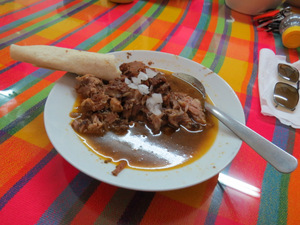 If you are ever in Melaque, walk down to the plaza, or cuadrado.  Look toward the bay and find the corner with the disco on the second floor.  Take that street and walk in the direction of the bay on the right side of the street.  You will come to a busy walk through in the center of this long block.  Go right into the dark covered cut through, past the fish market and the meat market. In the center of this block you will pass a restaurant with two big vats boiling directly in the front entrance.  This is the place where you can get a huge meal of a birria.

Birria is made using a base of dried, roasted peppers combined with read meat, usually goat meat.  It is boiled for over 16 hours which creates a flavorful broth and very tender meat. It is typically served in a bowl with a large portion of meat soaked in the broth with corn tortillas, onion, cilantro, and lime.  The recipe is originally from Jalisco and so it very popular in Melaque.  Our little restaurant is the place to go to get this meal. I can tell you that it is one of the most flavorful meals we have had here.


On the 2nd of January we set out with Jerry to hunt down the elusive dorado.  Reports had been good and fish ere being caught each day at a very consistent rate.  Enter the Dean factor, weather change and rain.  It rained the two days prior to our trip and most of the night before we left.  I call it the Dean factor because I have yet to have the right weather conditions for fishing for stealhead back home this year.  I ether have a change of weather, or rising rivers, or too much sunshine.  I haven't had the perfect stealheading day that has followed me down to Mexico.

Our trip provided us with three barrilete, which we tossed back and one small barracuda which we kept and ate.

Since we have been visiting Melaque, about fifteen years now, we have talked about what we will do when we finally have the opportunity to retire and can spend more time in this area.  We have never considered purchasing a spot in Mexico, it just didn't feel right to tie ourselves down and feel like we needed to go to that location because of the investment. Renting was the best option in our minds and we just needed to figure out how we should go about doing this.

As part of our duties this year we were determined to find a location that would provide us a home, but would not break the bank and allow us longer stays in Mexico.  Another part of our long term plan was when we purchased our camper and truck, we felt that we could possibly find a place to stay where the camper would become our home.  This would allow us to be mobile and flexible.  Our big investment was the camper and we hope that it will work as our home for extended stay adventures.

From the day we arrived in Mexico we have been searching and checking out the options available for longer term RV type parking.  We have found it to be a bit like an onion.  You find a spot, peal a bit deeper and then the next layer either leads to another layer, or stops you because you find something undesirable.  A conversation with one person might peal down to another layer which is another person who owns a hidden spot somewhere in this little area.

Our first inquisition was at the new RV spot about four blocks from the house.  It was nice, enclosed in walls, had a pool and went for $600 US per month.  Next we went to Laguna del Tule and checked out their spots.  These were $600 US per month, had views of the laguna and were highly sought after during January and February.  We met some Bennetts there and talked to them for quite a while, they were very nice and informative.

Linda posted on her Melaque bullitin board, TomZap, and got a reply about a place on the lagona. She emailed the poster and they put us in touch with the owners.  We visited and the results were very positive.  So we did some more searching and found that we probably couldn't go wrong with this spot.  We had and have only one reservation about this particular area.  The bugs!  Everyone who lives down here says the laguna has more bugs then the other areas.  We did some more digging and found that the bugs are the baddest at sunrise and sunset.  People we know that live over here say they just have to bug spray if they are going to be outside at that time.  We decided that we can work around the bugs next year.

With this in mind we contacted the owner and gave her a deposit for the site next year January 1st to ???
We have also reserved the Pink House at #1 Reforma for the last two, possibly three weeks of December.  We are taking reservations for guests, so if you wanna check out Melaque, this might be the year to give it a try!