The weather for this weekend was wonderful, the sun was out and the skies blue. We had heard it was going to be the perfect camping weekend. We called up the Upchurches and met them down at Haybern State Park. Each day we hiked and on Sunday we found two Geocashes. This was our last camping outing for the season. Can't wait for next spring. 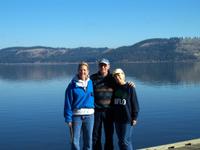 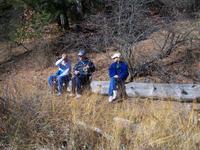 View looking across lake from Cache. 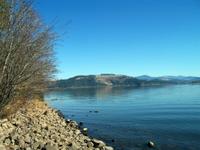 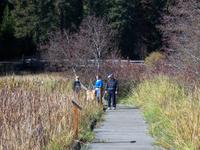 Posted by Canyonwren at 6:55 PM 8 comments

The Royal Room in Cottonwood was slightly deserted when we arrived. The pool tournament started at 7 PM and it was now 11:30 PM, so not many players remained. Dan and Mike were playing cutthroat with Teresa and I think there were about four other patrons hanging out at the bar. Jim, Tom and I settled in and started shooting on the second table. It was about 2:00 PM when we left the Royal, Dan and Mike had won ten bucks off a couple of locals, but could only collect two dollars, it was all they had. The rest of us settled for a two to two win-loss record in pool but that didn’t matter because it was real late. I drove folks back to the hotel and we all crashed amidst snores, farts and cigarette smoked cloths. Tomorrow we would be on the river.

Morning came fast and we packed up the rigs, ate breakfast and hit the road for Pine Bar. The sun was out and we had a slight over cast, but all in all the weather was perfect. Launch was easy and we proceeded on down to our first camp at Killer Goat Beach. 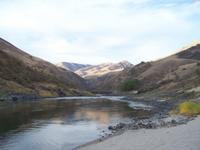 Tom and I prepared the first meal. I used two 12” dutch ovens and produced a Louisiana concoction that Tom’s brother-in-law had showed me and it was a hit. Barely has any leftovers and that put the heat on the rest of the group to produce a meal that matched ours. The group consisted of Tim, Dan Breeden, Tom Husby, Mike Wassmuth, Dan Redline, CurtFranson, Jack Green, Jim Bellatty and I. After dinner everyone settled in and the river stories started to flow. The late night on Thursday, the launch on the river, a big meal all made for an early evening for the boys because tomorrow we fish.

We floated and fished down thought the Cougar Canyon. Tom ran all the rapids in great form. I think we only got about a gallon of water in the boat through all the rapids. China had the big hole which we skirted on the left. Our camp would be on the beach directly across from the cabin

with the air strip. Mike and Dan put out their plainer boards and we settled in for another dinner. The dinner tonight was Danbo and Mike's. They made a dutch oven sweet and sour halibut feast. So far two dinners and very little left over, imagine that.

Next morning Tom, Curt, Jack and Jim hiked up to the top of the oxbow. I stayed on the beach swam and fished. The rest of the group set off down the river to fish and find the next camp. Once the four hikers got back from their hike we set off down river fishing and enjoying the sun. 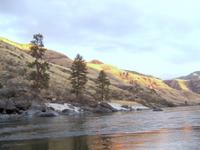 The third night’s camp was set up at Wapshillia. It was Jim and Jacks night for dinner and they did it up right. Chicken, dogs and Jack Daniels BBQ sauce was served hot off the grill. We ate and, of course, left overs were few.

Our fourth nigh camp was at Fly Beach located just above Sluicebox Rapids. Tim and Dan provided a huge sloppy joe meal. They filled two 12" dutch ovens and we ate them both. In the morning we got up and Tom and I left camp much earlier then pervious mornings (or in this case afternoons). Our goal was to row out leaving the motoring to the rest of the group. We fished hard on the way out and caught a ton of bass. The group passed

us at Coon Hollow, but we weren’t to far behind and got to the ramp as they finished up the take down and load up. Tom backed down the trailer and we loaded it up and hit the road. We got back to Cd'A about 7:00 PM.
Posted by Canyonwren at 3:11 PM 2 comments 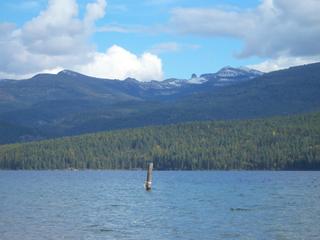 With the camper packed Linda, Baka and I set our sights for the Priest Lake area. We had heard form a park ranger that the campground at Reeder Bay was open so we thought we would high tail it up that direction and stake out a spot for the weekend. We took Highway 41 North to Newport and then hung a right and followed Highway 2 into Priest River. Priest Lake is a great spot but we seldom travel this way because of the Washington population that takes over the area in the summer. I guess we should be a little more forgiving of our neighbors, but it seems like we seldom see Idaho license plates when we drive up there.

When we arrived at the campground we were one of two campers in the area. By the end of the weekend our group grew to about four campsites, but they were spread through out the area and none of the groups bothered the others. Our site overlooked the lake and included a fire pit and picnic table.

Linda and I set up the camper and detached the Jeep. By the time everything was in place the sun had gone down. The week had taken its toll and we stayed awake just long enough to eat and settle in to the camper.

Next morning we loaded up and drove up to Beaver Creek Campground. The trail into the upper lake is one of our favorites. We hiked into Plowboy Camp and checked out Upper Priest. 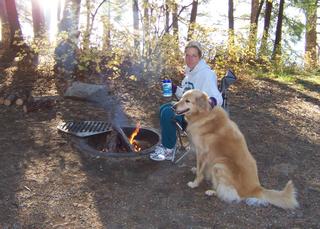 On the way back we found some firewood. We used the new chainsaw to cut it up and that worked out great. I now have an idea how much wood is needed for a weekend fire pit.

The evening’s events focused around our meal. I made up a rice dinner and corn bread both were cooked in the dutch ovens. Everything turned out fantastic, which proved to be a big mistake because we ate until we were so full we couldn’t move.

After dinner we watched Jack Black in The School of Rock. Yes, I know we were camping, but it was dark and cold and well I had my laptop. What can I say. We stayed up until about 10 PM. If we didn’t watch the movie we probably would have went to bed by 8:30 PM. It was a funny movie but I would not highly recommend it to everyone. 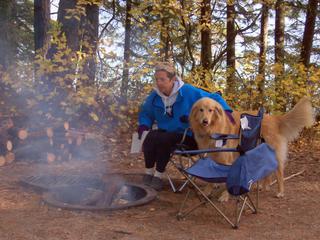 We got up the next morning and I cooked breakfast. Linda started the campfire and we sat around while the sun burned the fog off the lake. We could not have asked for a better weekend.
Posted by Canyonwren at 11:57 AM 0 comments