After ten straight days of cleaning and polishing the exterior of the truck camper, we were ready hit the road again. Wax on, wax off is getting harder to do, but the camper really needed the attention and protection of a good waxing.

With our shiny camper, we drove west through Spokane and Airway Heights, our sights set on Steamboat Rock State Park. We had a rendezvous with our Westport, WA friends, Don and Caroline. We haven't visited with them for overva year and it has been a few years since we all were camping together. We drove Highway 2 through the wheatlands of northwestern Washington. There were a few sprinkles of rain on the windshield, but no downpours to worry about. The drive was easy, except for one small misshap. As we rolled on down the road we could see something moving way out in front of the truck in the middle of the highway. As we got closer, I could make out a female duck on the center line of the road. I moved closer to the edge of the road. I then started to make out a male duck running next to the female. The hen started to fly which confused the male. He lifted off and flew right into the path of our truck hitting just above the passenger side window. The hen flew away unscathed. The drake was not so lucky and smacked the truck.  It surprised and saddened both Linda and I. If the drake had just lifted off to follow the hen, we would have driven right by. But you know men, they have to go their own way. Bad choice!  We stopped at the rest area a mile down the road and I looked for damage. It made a loud, sickening sound when it hit, but all was well for the truck and camper. Not so well for the drake. Or Linda. 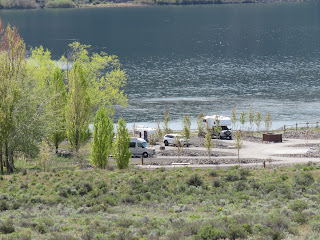 We arrived at the campground a little before 2:00 PM, found our site and settled in. Don and Caroline had arrived the day prior and were already set up and waiting for us.  A friend of the Samulsons, another Linda, was also camping at Steamboat and she came over to their site to chat.We all spent the rest of the day talking and getting caught up. Caroline fixed a great meal of tortilla soup. I started up our new gas campfire and everyone had a great evening. 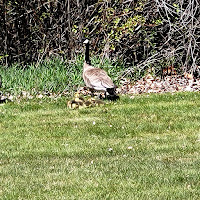 Tuesday was a very nice day with bluebird skies, so everyone just hung out and enjoyed the warmth. We fixed chicken fajitas and everyone stuffed themselves.Wednesday the forecast called for partly cloudy skies, so Caroline and I decided to do the hike/climb up to the top of Steamboat Rock.  We loaded up some water and snacks and told everyone we would see them in a couple hours. Linda laughed, knowing that it would take longer, and told us to keep them posted on our progress. 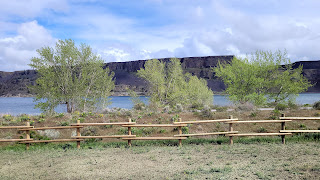 On the climb up, we met up with a couple hikers coming down. As they got closer, I thought I recognized one of them. As we passed, I said "Is your name Bob?" At that point he looked at me closer and said "Squirt, is that you?"  Bob and I ran many runs together as Hashers. We hadn't seen each other for about four years. We made introductions and chatted a bit. We said our good byes and off they hiked. Bob called my name and I looked up just in time to get a full moon as he departed. Man, I miss all my Hashing buddies!We did the hike and got the great views of Banks Lake from the edge of the cliffs. The sun was great and there was a nice warm breeze up on top. The final adventure of the hike was to climb down the trail we had come up. It was steep and a bit slippery from the gravel. We took our time in descending.We got back down and noted our time. It took us just over 3 hours. Once again I said to everyone, "That is much steeper then I remembered!"  Linda laughed again and rolled her eyes.Evenings dinner was prepaired by Caroline and we had a wonderful spaghetti dinner. We again talked until dark and then went to bed. 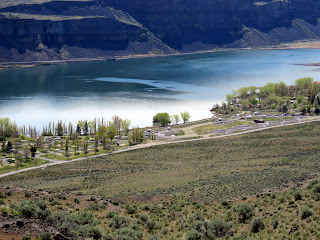 Thursday we woke up to rain and wind. It showered most of the day. I was out walking and met Bob and his wife Barb and they invited me to their trailor. I called Linda and she joined us. Bob and Barb are recently retired and are new to the retirement camping gig. We talked about their plans and we gave them info on how we travel. It was a fun conversation and we really enjoyed our time together.Back at the camper we watched the rain and caught up on some reading.
We packed up early and drove home Friday morning. 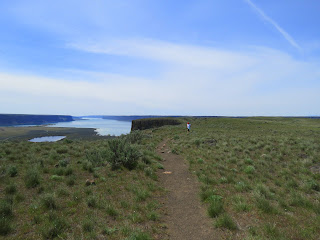 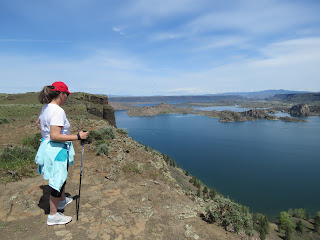 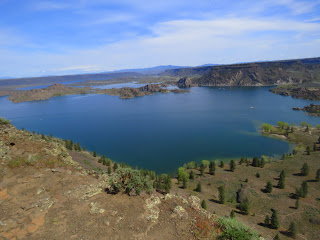 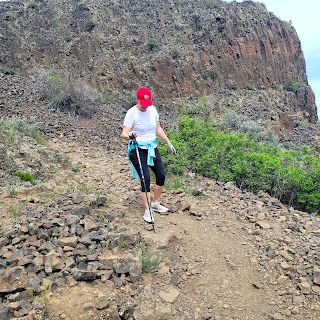 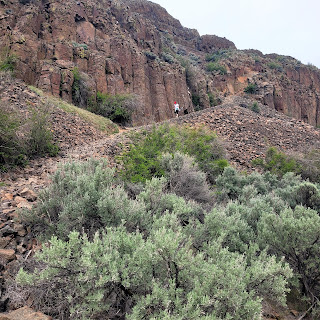 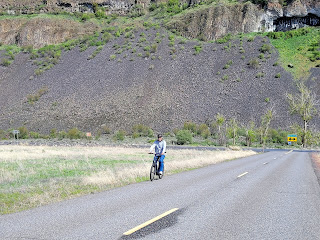 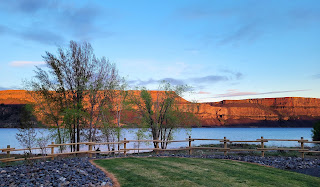 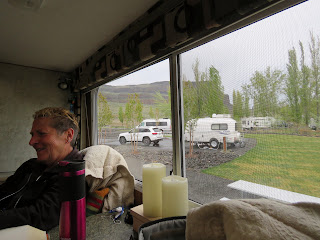 Posted by Canyonwren at 1:45 PM 0 comments

Here is the final map of our travels on this adventure.  We traveled 3870 miles and were gone 3 months and one day. It was a wonderful adventure.

Joshua Tree and Beyond 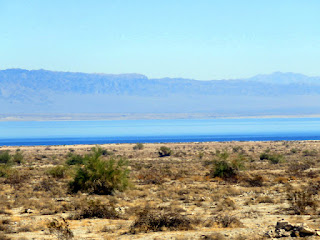 The song played in my head as we left Anza-Borrego. I really liked that album by U2, but had no idea where Joshua Tree was located or even what a live Joshua Tree looked like. Yet, here we were on the road to our next campground in Joshua Tree National Park. We had reservations for three nights at the Black Rock Campground. Our destination was 118 miles of roads that lead us through desert scablands that looked like they were on another planet and past the Salton Sea. As we drove, Linda looked up background information on the Salton Sea and discovered that this 35 miles long, fifteen-mile wide highly-saline body of water was created when a man-made dike broke loose and spilled water from the Colorado River into this flat desert valley. After several years of dike repair, the water flow was suspended and the waters were left to evaporate which caused the lake to become increasingly saltier. In the seventies, people flocked to this area to enjoy the ocean-like waters, but as the years went on the saline concentration grew greater and the lake became highly toxic. I bet you didn't know that, did you? 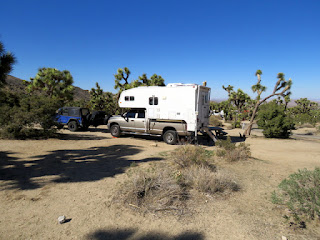 Once the lesson on the Salton Sea was over Linda read me information about a place known as the Slabs. This is a closed Marine base where people go to boondock during the winter. It's said to be a very eclectic group of people. You can find a bunch of information on this area by following the link. I thought it was very cool.

We reached our destination and after a bit of frustration dealing with breaking apart Stinky Jeep and the truck, we settled into our very unlevel site.  Our first observation is that this is a rather old campground and there might be two level sites in the entire campground. It took all but six of our leveling blocks to get us close. Linda engineered a pyramid of epic proportions that got the camper close, I said close, to level. 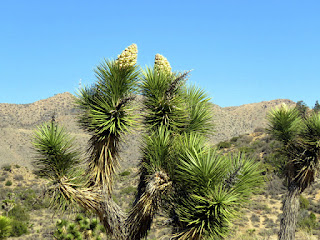 By now, settling in is easy and takes only minutes. Linda was in the camper on her phone when we received an email from the Joshua Tree Park Rangers telling everyone that there was a severe wind warning in effect. They said that for the next few days we would have high winds and that we should be aware of the dangers that we could face.  Wow, we have had wind warnings all down the Columbia Gorge and along the Oregon coast, we hit an earthquake in California and had torrential rain as we crisscrossed the heart of that state. High winds were present several times in QV.  Now, another big warning! I am a firm believer in global warming and climate change. 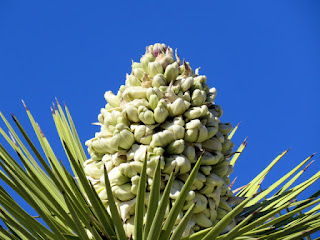 I jumped into Stinky and drove into Yucca Valley and explored as the winds blew. Linda stayed put and read her book.

The winds blew hard through the night and into Thursday. We did some walks around the campground, but dust from the desert made those forays uncomfortable. Hiking on any trails was unadvisable.

Friday, the winds were gone and the sun was out so we did some hiking. The trails were very nice and we got some great photos of the area around the campground. 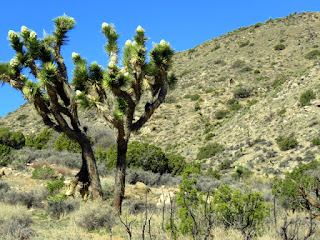 By Saturday we were ready to leave. Our journey started December 15th and we were now ready to turn north and head home. Our rigs were well packed and ready to roll.

Back in December when we left Post Falls, diesel prices were a little over $3.50 per gallon. As we made our final fillup in California, prices had risen to $6.60 per gallon. Looking at our route all we could do was hope that the price would get less as we continued towards our home. The war in Ukraine had hit home.

The Mojave Desert was amazing! We traveled through the desolation noticing that the Joshua Trees were more numerous than in Joshua Tree National Park! No wonder the album cover for the U2 hit was taken in this desert. 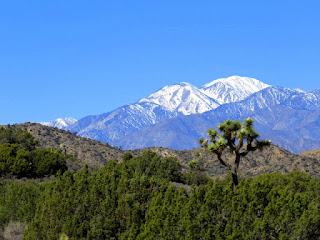 By this time we had developed our first vehicle problem. The brake system between the truck and Stinky Jeep had developed a short. The short caused the brake alarm to make a shrill squeaking sound that came and went in a random fashion.  It was very annoying and I started checking connections trying to find the short.  It drove me nuts for the next two days.  I finally figured out that it was in a plug at the Jeep connection and I was able to tighten it which made the sound stop. 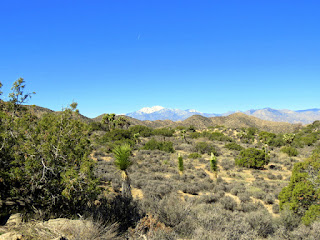 We spent the night at a pull-off near Crystal Springs and then drove on the next day. Our stop for that night was Cactus Pete's in Jackpot, NV. When we arrived we found a spot and walked to the Casino to pay for the site. In the casino it was dark. Game machines were running on a generator, but the power to the entire casino and RV campground was out. The lady at the desk was not a happy soul and was very noncommital when she answered our questions about camping. We walked away with about as much information as we had when we walked in, so we went back to the camper, had dinner, and went to bed. The next morning we packed up and hit the road, leaving Pete's in our rearview mirror, hoping they were not chasing us down to get the $20 fee they failed to collect. 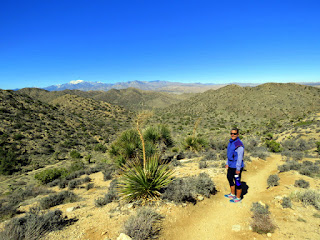 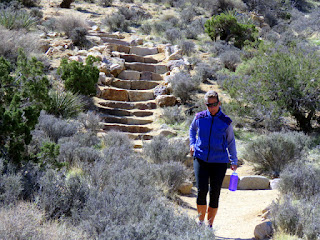 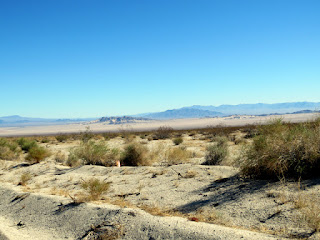 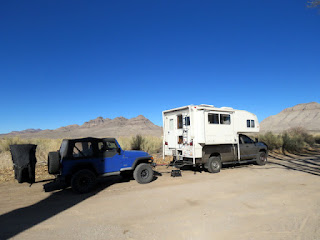 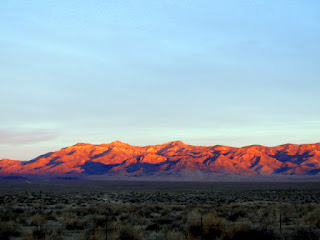 Posted by Canyonwren at 5:29 PM 0 comments