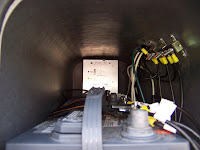 So we have finally finished our Northern Lite camper electrical system upgrades. Here is what we did. First, we changed out our electronic power converter, a Parallax/Magnetek 7345 system, to a 30 amp power converter. I followed the direction by William R. Hemme and it was very easy. I was able to do everything my self and that in its self is a testament to the ease of installation. I have been monitoring the converter and all systems are go.

Then after much debate and a lot of research on the NATCOA website, we decided to bite the 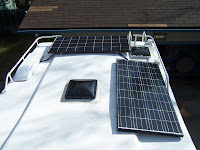 bullet and get a solar power system so that we don’t have to worry about power. I contacted several folks who deal with solar power and talked about our needs. What it came down to is, how much you want to spend, and what do you think your real power needs are. I figured our power needs and made a decision that a 130 watt solar panel was the minimum I would like to have. This would cover most of the power needs if we are careful and don’t try to run to much stuff. The maximum the two batteries would support would be two 130 panels. With this in mind Linda and I talked and decided, what the heck let’s go for the max, so that is what we did.

I searched the web and found good prices on panels, Kyocera KC-130 130 Watt Solar Panels, through Arazona Wind and Sun. Watching the NATCOA forum I noted that folks were high on 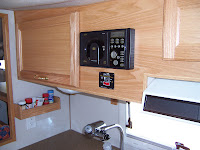 Blue Sky charge controllers. I ordered a Solar Boost 2512i from Blue Sky with the IPN-Remote display. It all came in within a few days and we were ready to go.

Once again I had a decision to make. Do I do the install or do I pay to have it installed by the pros at Blue Crick RV. My first decision was easy, there was no way I wanted to drill holes in our camper roof so that would be completer by Blue Crick. Next I looked at the controller set up guide and it looked like a very easy installation. My brother said he would help so I called 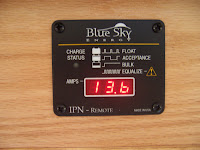 Northern Lite and talked with them about the install. After my conversation I still didn’t feel comfortable with doing the job at home, so we went with Blue Crick again. So on last week on Friday I took every thing into Blue Crick and by Wednesday we had our camper back with the new system. So far we have had mostly clouds and little sun, but I can’t wait to get down to Grand Staircase-Escalante National Monument and see how it works.
Posted by Canyonwren at 1:44 PM 0 comments