With Linda working in Lewiston, Baka and I decided to drive to Forest Grove on the Clarkfork River and stay the night. Fitz, a friend of mine, met us on Saturday and we floated the Alberton Gorge streach of the river.

We arrived at the camp ground on Friday night at about 7:30. All the real camp spots looked to be full so I decided to set up my camp in a parking spot next to the regular spots. There were two trailers in the best spots, a boat in the next best and a truck was in the final spot. Set up went well and after I finished one of the old guys, from the trailers, came out and we talked for about ten minutes. They were from Billings and he said they came here quite often. He floats the stretch from Tarkio done to Forest Grove and fishes with his wife and buddy. He was nice and I enjoyed the conversation.

I went into the camper to make dinner and after about ten minutes I noticed the two old guys out moving equipment. They moved the boat out of the #2 spot and then moved their truck into their area. This left the two spots open that I had wanted to camp in, but I was all set up and it would take a little work to make the move into #2. I guess I should have asked if the spots were taken but it didn’t dawn of me that they would have their stuff all over the entire campground.

I ate dinner and read my book for about an hour. I cleaned up and went to bed about 9:00 PM. In the morning I got my coffee and cleaned up the camper. Steve arrived about 10:00Am and we made arrangements for the trip. I tied Baka to the bumper and filled up his food and water. As I did all this a lady and her husband came in and set up in spot #2. She looked very familiar and after a few minutes she cam over and reintroduced herself to me. It turns out we meant them the last time we stayed at Forest Grove. They had given us some wood and we had talked about our dogs. They were from somewhere around Butte and had been coming over for many years.

We rafted the river, the day was perfect but the water level was very mellow. Everything went well and we were off the river by about 4:30 PM. Load up wasn’t smooth. I forgot how it was to work with Fitz and all his dog needs. He has a big young dog and it took a lot of work to keep it out of other boaters way. While we were loading we met a young kid from Salmon Idaho. He needed a ride to the Tarkio Ramp so we all loaded up and headed out. Half way to the ramp Fitz’s cooler fell under the trailer and we had to stop and retie it. Not much damage but it did drag quit a distance.

When we go to Fitz’s truck we unloaded my boat and moved his over to his trailer. Just as we finished a storm came in and all hell broke loose. It was a down pour that lasted until I drove all the way to St. Regis. Baka and I arrived home at about 8:45 PM where we unloaded some of the equipment, cleaned up and went to bed.
Posted by Canyonwren at 8:55 PM 0 comments

This weekend was the start of the run and bike season. Linda ran in the Spring Dash while Baka and I watched from the sidelines. The weather was good for running, maybe a little windy, but all in all it was a good day for the harriers. I can't go into any race details, but I can tell you how it was to be watching everything. 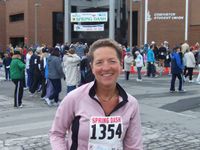 A big crowd of runners/walkers took off at exactly 9:02 am. Baka and I were stationed up on the Dike Road where I was able to get a picture, it's below. We were able to stay in that location just long enough to see the bulk of the group move out into Coeur d'Alene. The reason we left our spot was that the wind was so cold even Baka leaned against me to keep warm.

From there we walked to the SUB and stood in the sun until Linda arrived back at the finish line. She was not happy with her time but I thought she did a great job for her first run of the year. 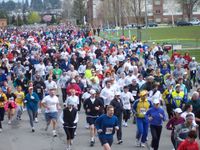 Linda is in here somewhere!

Posted by Canyonwren at 7:49 PM 0 comments

Email ThisBlogThis!Share to TwitterShare to FacebookShare to Pinterest
Labels: Around Home, Linda's Events

The alarm went off at 5:00 am and we were on the road with gas and coffee by 6:00 am. It’s getting easy to put things in order every morning. We drove and listened to the last four CDs of the book “The Lovely Bones”. It took five hours from Dillon to Post Falls; Linda took over after we filled up with gas. She drove to St. Regis and then I drove the final leg home. As we moved closer to Coeur d’Alene the weather got increasingly worse until when we arrived home it was raining.

Now it is 3:00 pm and we have gone shopping, ate lunch, put stuff away and read the backlog of news papers. I wish we didn’t have to be back so soon. I love traveling with Linda and Baka they make the time fly and I have such a good time with them. When we were driving today we started talking about the many opportunities to travel we have coming up this summer. It looks like Linda and I have a lot of travels to look forward to in the next few months, we’ll keep you all posted on where we end up.

(If you want to see more photos follow the links located on the left Info bar.)
Posted by Canyonwren at 3:38 PM 0 comments