Look Who Dropped In

I was sitting in my office at work on Monday when my Skype account window started flashing and beeping. Strange, no one calls me on Skype. So I answered it and low and behold it was Larry, our neighbor down in Malaque Mexico. He was calling from his home in La Connor 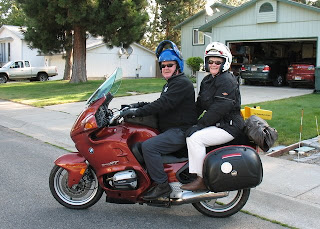 We talked for a bit, and of course I said that our place was theirs for as long as they needed.

On Wednesday morning they cruised in on their BMW Motorcycle. They had traveled up north to Kalona BC, stayed with some folks there and then headed down into the states. They spent the night in Kettle Falls, WA and got up early, rode down and arrived at our house at about 8:30 am.

It was great to see them! We made a big breakfast and sat around and talked until I had to go to work. They hung out in Cd'A during the day and then we had a real nice dinner together out a Tony's on Lake Coeur d'Alene.

In the morning they cruised south on I-95, heading for Cambridge, ID where they were visiting some relatives. It was a quick visit, but we enjoyed every minute.

Posted by Canyonwren at 3:48 PM 0 comments

Email ThisBlogThis!Share to TwitterShare to FacebookShare to Pinterest
Labels: Around Home, Friends

What I learned on the river. By Dean Bennett
I learned that when Linda wakes up on the first night of a trip and says, “Dean, do you think it is going to rain? I don’t like that lightning.” I should get out of bed and get ready for rain.

After the first lightning flashes and about ten sprinkles the clouds opened up and a deluge of huge rain drops hit our cots. It only took me about five seconds to race down to the boat and snag the umbrella. Linda rolled up our bedding and we were able to escape the flood with minimal dampness on our sheets. I then took about five minutes to set up the tent and load everything back in out of the wet. Our first night on the river was proving to be exciting.
We put on the Lower Salmon River at Pine Bar and did a short float down to the beach on the left, just above Packer Creek. It was a fine campsite and our groups of folks from North Idaho College were excited about setting their first river camp. It was the 4th annual NIC Employee raft trip provided in conjunction with the Outdoor Program and we had just met most of the 11 hardy rafters earlier that morning. 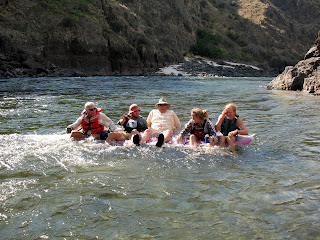 We met at the college, drove down to the put in, rigged and launched the boats all by 1:30 pm that Thursday. The only problem we incurred what when our van headed on I-95 south over Highway 12 up the Clearwater, and spotted the other van traveling below us moving in the direction of Montana. We pulled over and waited for them in Lapwai and within a few minutes they were back on our tail. We found out when we arrived at the put in, that there was a huge controversy over a “GIANT bite out of a turkey sandwich” that distracted the driver which caused him to take the exit instead of following I-95. 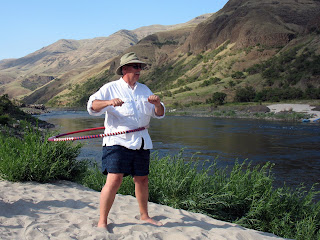 Everything that first day went very smooth. We made camp, ate dinner, talked and laughed, and then went to bed; it was a wonderful day on a very beautiful river.
Friday morning we ate a hardy breakfast and loaded the boats. The plan was to get on the water, run Cougar Canyon and the rapids hidden within its walls, and then make camp somewhere around Billy Creek. The river was running pretty fast for this time of year. There was plenty of water and that made rowing very easy, but washed out most of the rapids. We sailed through the canyon to Snow Hole rapid and after scouting it, we made short work of it also. Lunch was provided on the first beach on the left below Snow Hole and we made short work of sandwiches, chips and cookies.
We floated down around the oxbow and attacked China Creek Rapid. Everyone did a fine job and we kept all boats upright. Once we were beyond the whitewater of China, we checked our watches and made a decision to continue on and try to find a spot to camp around the Billy Creek area.
Luck provided us a great beach on river right. It was located directly across from Rock Be 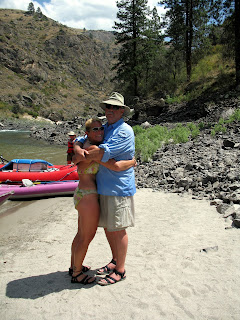 ach, where our friend Debbie was burred after her tragic death. After we set camp Linda and I took the ducky over and visited Debbie, found some rocks and left her with our thoughts.
July 24th was Linda's birthday.
Back at camp we helped make dinner and by that time we had fully noticed the one drawback of camping on that beach. Bees! The bees were terrible! Jess was the first to get stung, I was next and then Jess got hit again. You really had to concentrate to keep your cool as you ate. It took a lot of the fun out of our stay, but I guess that is part of the challenge of being on the river.
We fought the bees for breakfast and got back on the river in real good time. Our float was about three hours and we reached Frog Beach in the mouth of the Blue Canyon early and set our camp. Jon spent about an hour rigging the ducky into a floating bench. Then we spent the rest of the afternoon laughing and cooling in the river. It was one of the funniest times I’ve had in a long while. As the sun dropped over the ridge we hiked the trail up to a point over the river where you could look down the Blue Canyon and up river over Rattle Snake Ridge. It was a beautiful spot and the views were fantastic. We hiked down and Jess had dinner all prepared for us. We ate and enjoyed the meal without a single bee in our camp. 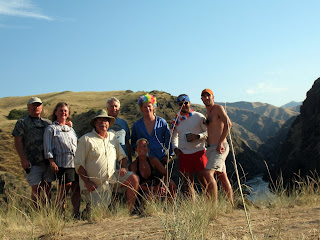 Morning breakfast was quick and easy. We were packed and on the river by 8:30 am. The trip through the canyon was uneventful but as majestic as ever. We hit the Snake River and immediately was hit with a wicked upriver wind. We rafted the boats together and motored, without problems, down river to Heller Bar where our rigs awaited us.
I was asked how many times I have run this stretch of the river and I honestly cannot remember the number. Each time has been special and everyone I have traveled with have been great folks.

Posted by Canyonwren at 4:46 PM 2 comments

“So let’s drive up this road (points to map) and make this loop. It can’t take all that long!”

Leaving the Donkey Creek campground, where we were staying the weekend, we drove up Marble Creek till we came to a split in the road. Straight ahead FS321 followed the river, so we took FS758 heading up Eagle Creek. The idea was that if you follow this road, it would eventually lead up to Hobo Pass and loop back via FS321. By the map it looked clear enough.
Our drive wound up Eagle Creek and dropped down to Lines Creek where we stopped at the start of the “Famous Lines Creek Trail”. Along the way we gathered firewood, spotted deer and enjoyed the vistas provided up and down the ridges. 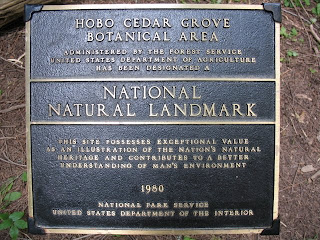 On the map it looks like you drive past the trail head and cross a creek then take a left and follow the road up over Hobo Pass. What we did was just that, but take out the over Hobo Pass part, and add drive ten miles up a road that eventually started disappearing, then back track to the trail head at Lines Creek. We scratched our heads and studied the map. It looked like if we head down towards Clarkia, we would cut back left and then head over the pass.

Off we drove. After a couple miles we met a log truck grinding up the road. We pulled way off out of its way and started second guessing ourselves. Five minutes passed and we decided that we had gone too far so we turned around and followed the truck back up to where it cut away. It was obvious that they were logging below this point and that the truck traffic might be bad. We talked about it a while and studied the map and finally turned around again and headed down toward Clarkia. This time we were extremely cautious as we wound down the road. 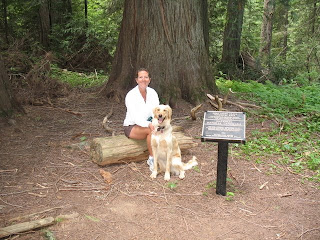 We came around a corner and ran into an intersection where three roads merged. Sitting there was a pickup with a logger talking on his CB. Linda asked him if we were on the right track and he assured us that we were going in the right direction. He sounded like other people have asked him the same question before; he smiled and said “Oh, you’re doing the loop, yeah you on the right track!”

A couple miles on down the road we found the cut off over Hobo Pass. We looked at the junction, compared it to the map and decided that the map is an abbreviated view of the roads and trails, so when traveling you must double the distance, hold your course and look for a logger. 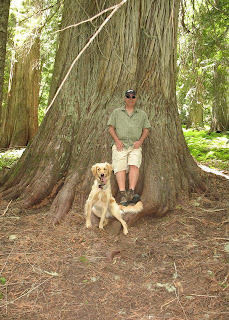 At the top of the pass we veered right and drove two miles to the Hobo Cedar Grove Botanical Area where we took a mile long hike through the towering Cedar trees. It’s a pretty amazing place. Though the day was hot and sunny, the temperature in the cedar grove was almost to the point that you would want long sleeves. The trail was well maintained with numbered points of interest along the way. We walked fast and took a bunch of pictures. By now we were three hours into or small wood gathering adventure and for the first time in a long while we were without water or snacks.

When we travel anywhere we usually pack food and water enough to feed an army, but this drive was so spur of the moment that we didn’t pack anything.

We hurried back to the jeep and drove the seventeen miles down Marble Creek to our camp at Donkey Creek. We ate lunch, unloaded the firewood and then I went fishing, rounding out a great day.

Posted by Canyonwren at 4:56 PM 0 comments