The goal was to hit the road at 7 am, we fially made it at 7:07. Not a bad start to our spring break adventure to southern Utah. Out house sitter called in while we wer on the road and so did our house cleaning lady.  Linda's phone rang off the hook today (do cell phones do that still?). My phone seems to never ring and I really don't mind that.

We crused on l-90 into Montana and kept moving, stopping only for fuel. We made great time, and only had  little snag when we stopped in Idaho Falls for some food. We exited the freeway looking for a SUBWAY. Finding one just off the highway I entered the parking lot only to find that there was no exit and we were too long to get turned around. We had to unhook the Jeep and back everything up until we got turned around. Then I drove the truck over to a large lot and Linda brought the Jeep over. I rehooked everything while Linda went into Burger King for food.

All only took about 15 minutes, but it felt longer. We were back on the road and arrived at the KOA in Pocatello a about 5pm our time, 6 pm mountain time. 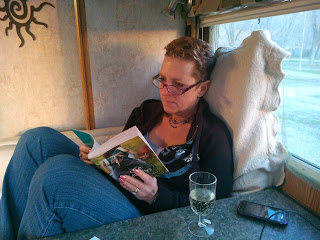 Posted by Canyonwren at 6:49 PM 0 comments


I have been researching items that we may need when we take our extended trip to Mexico.  One of the things that I have learned happens all the time in Mexico is the fluctuation of power at RV sites and in towns.  This fluctuation can cause big problems with the electronics in the camper.  If this happens we could fry our controller causing a huge problem south of the border.

To keep ahead of the problem, we decided to install a surge guard. We figured that the risk of not having a surge guard was much greater than the cost involved.  I drove over to Camping World and checked out the surge protectors they sell and found that they had a 30 amp Hardwire Surge Guard unit that would work and it was on sale.

I brought the unit home and read the installation instructions.  It looked very straight forward so I gathered up the items needed for the job.  Out in the camper I checked out the possible locations and found that the best installation location would be in the cabinet below the sink.  Actually it was about the only location close to the main power center.

The first thing I did was to drive into town and visit Tom Husby to see if he had a scrap of wood that I could use to attach the surge guard to and then attach it to the cabinet wall.   He had a great chunk of wood that he cut to my exact measurements. We drilled holes and counter sunk them for attaching the unit to the board. Then we drilled holes to attach the board to the wall of the cabinet.

I drove home and dismantled the areas to get access to the wires.  What a mess of wiring.  This is the area where they terminate every wire in the entire camper, plus the charge wizard, the Blue Sky unit for the solar, and then to top it off a heat duct for the basement runs through this area.

My first thought was to remove the main power cable from the central power unit and attach it to the surge protector and then run a new wire back to the central unit.  This was a good thought, but I could not for the life of me get the cable unhooked from the main unit.  This changed everything.  My second approach was to get enough slack in the main power cable to cut in and connect the two ends to the surge protector.

The project started and as I went to work getting everything in order.  As the project went I had to lay on the floor and reach into the cupboard to do all the attaching, cutting and reattaching.  I think the project took about four hours to complete, but I probably moved about the camper for about six hours.  Working on this project was like doing six hours of Yoga.  After I finished the project my body hurt so much that all I could do was sit on the floor and pet Kobi.

I finished the project and cleaned up the camper.  I plugged the camper into shore power and then climbed into the camper.  Everything worked great.  I came into the house and marked that project off my check list.