It was one of the saddest trip departures that I have ever made. Linda kissed me goodbye, gave me a huge hug and with tears in her eyes walked away. The decision for her to stay home was a hard one and we both knew that it was best for Linda's folks and her peace of mind.

I put the truck in gear and slowly rolled away from the house, our cataraft in tow, loaded for the Main Salmon. After about 25 years of applying for a coveted river permit, my name had been pulled. The trip was meant to introduce our friends, the Edwardses, to multi-day river running, while providing a celebration of Linda's birthday on July 24th. We had been preparing and looking forward to this day since the middle of February. I drove off alone and a bit sad.

At 6:00 AM I picked up Beth Hanggeli and we followed I-90 east to Missoula, MT, turned south, hitting Lolo and Hamilton, Montana. At North Fork, MT we took a right and drove the dusty winding road through Shoup, Idaho to the river launch site at Corn Creek on the Main Salmon River.

As we drove into the campground we were greeted by a group of wild goats feeding by the side of the road. Our river party consisted of five boats and eleven river runners. Within an hour we had all rendezvoused in the campground and were busy doing the final preparations and then launching our boats.

On the permit were listed the names of the eleven folks that made up our group members: John and Loretta Sutherland; the Edwardses, Holly, Ryan Anika and Zane; Scott Klaue; Kellee Johnson; Beth Hanggeli; John Karpenko; and the permit holder Deano Bennett. The group was a mix of seasoned rafters and novices; outdoor enthusiasts and weekend adventurers all with the same focus, get on the river, relax and enjoy the beauty of this wild and scenic corridor.


We met with the forest service workers and let them know that our group was present and ready. They inspected our required gear and gave us the go-ahead allowing us to request our nightly beach stops for camping. Once our request list was posted we went to our campsites and readied for dinner and bed. My chosen bed site was located on the boat trailer giving me a great panorama of the campground, a very level and secure place to sleep.

The next morning we had a wonderful breakfast prepared by Scott and Kellee, consisting of muffin, egg and bacon sandwiches and coffee. A great way to start the trip.

At 9:00 AM we met with all the private boat groups and made the final selections for each nights camping while on the river. One group,  made up of boaters from Oregon, had selected almost the exact same beaches that we had listed the night before. Scott did the negotiations and he was able to talk them into exchanging two of our beaches for a super nice beach and then proceeded to get us a couple other beaches that worked out just fine. In the end, we had what we thought were much better beaches than the other group so we were all happy.


Our group launched at about 10:00 AM, just after the forest service lady gave us the speech on keeping the river corridor clean. Our first day was a short one of ten miles which took us to Upper Lantz Bar, a nice beach with a good swimming hole.

On the way downriver to the Lantz Bar campsite, we stopped at the site of the Legend Creek Pictographs and hiked up to the rock face that held this wonderful history. A short way downriver, we viewed the Devil's Toe Pictographs. Our last stop before we hit camp at Big Squaw Creek was at the beach named Motor. There on the sand up above the high water line sits an engine block from a jet boat that crashed and sunk many years ago. It’s cool to see it sitting there and reminds us that no matter how strong your engine is, the river will sooner or later win if you don’t take care and show your respect.

We had a great evening on our first beach. The Sutherland’s fixed a wonderful dinner of grilled salmon. We ate so much and were so tired from all the prior preparations that we went to bed really early.


The next day we set off on another day of downriver exploration. The first big rapid was Black Creek and we all chose the run on the left side of the river. Everyone had great runs so we celebrated with a little soak in the hot soothing waters of Barth Hot Springs.

As we readied to leave the hot pool, I stepped over the rock wall and slipped, falling over the edge. I was able to stop myself before I tumbled down the slick rocks of the hot pool discharge, but I did need assistance to pull myself back upright. It was a close call but I survived with only one scrape on my lower leg.

We stopped for lunch at a nice small beach and my bad luck continued. As I ate a meat stick, a yellowjacket swooped in and lit on my lip. Instantly, I felt his sting and brushed him away. The lip immediately began to swell and boy, it hurt like hell. I took some Benadryl, but for the rest of the day, I had shooting pain down into my jaw. For the next two days, I had a bit of a problem drinking without drooling. Everyone enjoyed commenting about my fat lip. It wasn’t a huge hardship; the annoyance was gone in a couple of days.

We stayed at Big Squaw Beach that night. It was my night to fix dinner, so I pulled out one of our standard crowd-pleasers, fajitas! Everyone seemed to enjoy the meal and once all the kitchen work was finished everyone went to bed early.
The next day was our big rapid day. We faced Big Mallard first. Everyone except myself had great runs. My boat was very light in the front and the lateral wave just before the gap between the rocks, pushed me too far to the left and I smacked the left rock. I did the same thing two years ago when we ran the Main Salmon. I guess Big Mallard has my number.


Elkhorn Rapid was the next big run and we all had pretty good runs through it. Our next assigned beach was Hancock Beach and when we arrived the weather changed and we had a nice big rain shower. All the tents were set up before the big stuff came down, so we spent a lot of the evening under umbrellas. John K. and Beth grilled up some steaks and potatoes, a huge treat!

One of the funnier moments of the trip came during this stop when Ryan carefully waded into the water to fill a pail for wash water and ended up slipping and falling completely into the river. It was hilarious! He fell in slow motion and everyone was watching at that moment. I laughed so hard I had tears in my eyes.

This was the only night that I slept in my tent the entire trip.

In the morning we ate breakfast and moved on down the river reaching our next camp at Jim Moore without incident. Ryan and Holly prepared spaghetti for dinner and our evening was filled with talk of hunting and past adventures. By this time we were a well-oiled setup and tear-down river machine. It took shorter times to set up camp and tear them down in the AM.

We floated into Mackay Bar the next day. Everyone bought ice cream, shirts, and books from the little store by the museum. We hiked around the place discovering the history that Buckskin Billy created. Old Billy was quite the guy. The museum showed a video of him along with a great collection of the odd things he created. Once we finished our treats we pushed off and floated past the spot where the South Fork of the Salmon joins the Main Salmon.

Landing on Haynie Bar on the 24th of July was a bit of a heart breaker for me. Linda's birthday and she was not here. We celebrated with a delicious meal prepared by Kellee. She whipped up an enchilada Dutch oven dinner fit for a king and topped it off with warm chocolate chip cake.

This was set to be a theme night, but with Linda gone the importance of the event was low. I dressed as a dog, Kellee was Mary Anne from Gilligan's Island, Scott was the Skipper, and the Edwards dressed in their Seahawks event wear. It was fun, but very low key.

Our next night's camp was one that was not designated so we pushed on until Slide Beach where we set up a great camp. Ryan and Holly prepared a meal of grilled pork loin with all the fixings. We ate our fill and faded off to bed.

The final day's float took us down the river and out of the permit required area. We passed the Carey Creek boat ramp and didn’t give the huge crowds of commercial and private float groups packing up a second glance.

Our last night was spent on Chamberland Gulch Beach. I made a dinner of pesto, chicken and three-cheese tortellini and everyone got their fill. We went to bed and before long were serenaded by a chorus of coyotes howling at the moon. It was a sweet end to a great eight-day float trip.

In the morning we did our final pack up and were at the Spring Bar takeout by 10:30 am. The loading went well, except that Sutherlands had to change a flat tire on their trailer. Everyone gathered and said their goodbyes. The Edwardses rode with me and we drove quickly to Grangeville where we had the best double bacon cheeseburgers in the world! 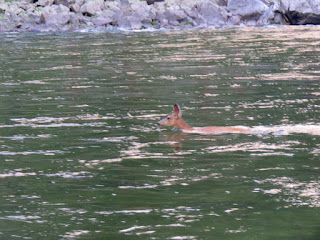 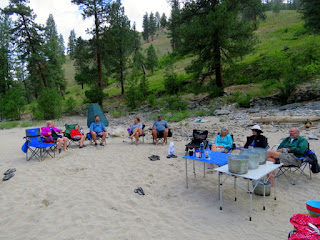 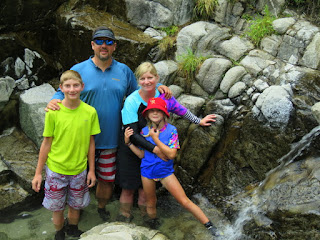 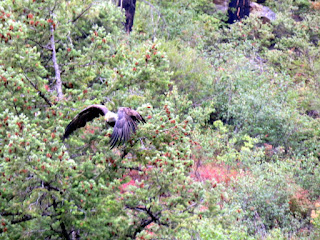 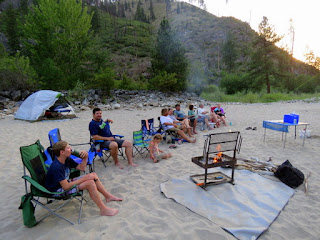 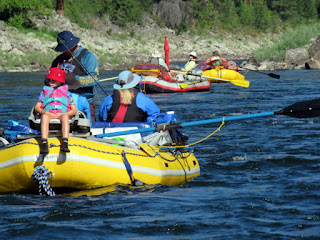 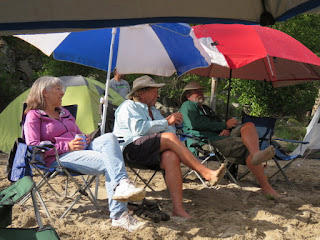 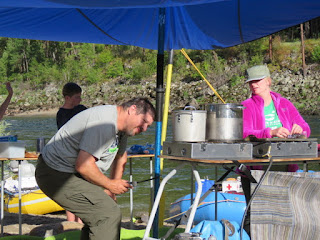 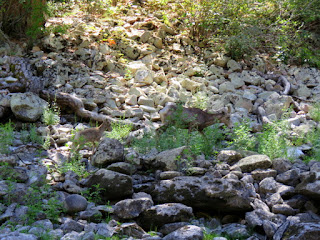 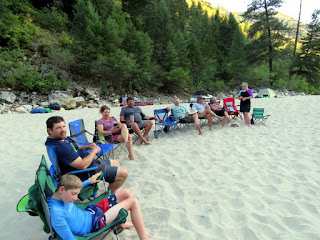 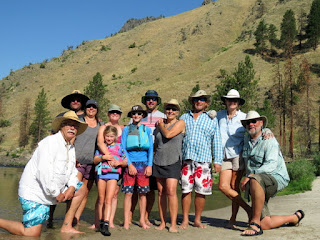 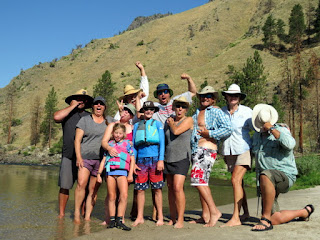